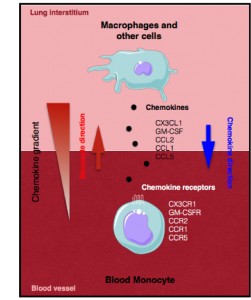 Pulmonary inflammation, characterized by the presence of perivascular macrophages, has been proposed as a key pathogenic driver of pulmonary hypertension (PH), a vascular disease with increasing global significance. However, the mechanisms of expansion of lung macrophages and the role of blood-borne monocytes in PH are poorly understood. Using multicolor flow cytometric analysis of blood in mouse and rat models of PH and patients with PH, an increase in blood monocytes was observed. In correlation, lung tissue displayed increased chemokine transcript expression, including those responsible for monocyte recruitment such as Ccl2 and Cx3cl1, accompanied by an expansion of interstitial lung macrophages. These data indicate that blood monocytes are recruited to lung perivascular spaces and differentiate into inflammatory macrophages. Correspondingly, parabiosis between congenically different hypoxic mice demonstrated that most interstitial macrophages originated from blood monocytes. To define the actions of these cells in PH in vivo, we reduced blood monocyte numbers via genetic deficiency of cx3cr1 or ccr2 in chronically hypoxic male mice and by pharmacologic inhibition of Cx3cl1 in monocrotaline-exposed rats. Both models exhibited decreased inflammatory blood monocytes as well as interstitial macrophages, leading to a substantial decrease of arteriolar remodeling but with a less robust hemodynamic effect. This study defines a direct mechanism by which interstitial macrophages expand in PH. It also demonstrates a pathway for pulmonary vascular remodeling in PH that depends upon interstitial macrophage-dependent inflammation yet at least is partially dissociated from hemodynamic consequences, thus offering guidance on future anti-inflammatory therapeutic strategies in this disease.